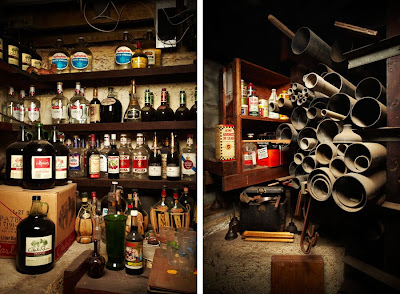 Alex Farnum posted the photos he took for a recent issue of LA Magazine:


So try this on for size, I was asked by Los Angeles Magazine to go to a small spanish bungalow in Silver Lake and check out this house. Apparently, the couple who had built the home had passed and their basement was stockpiled for the apocalypse. They were both Jahovah Witness’ and believed that the end of the world was upon us. I thought that this was a story I couldn’t refuse.

Upon arriving what I found was a basement that was a time capsule of these peoples lives from the last 70 years. From alcohol to containers of soap, bolts, screws, books, cameras, maps and jarred food. This basement had it all. This was hoarding at its fullest. An Art Direction would have shit himself by the natural selection and set-up of so many things! I spent one long (and very dusty) day in that basement. At times I was alone in the house and believe there was a “presence” with me. They were probably wondering why this man was rummaging through their personal things.