BIC Cristal For Her 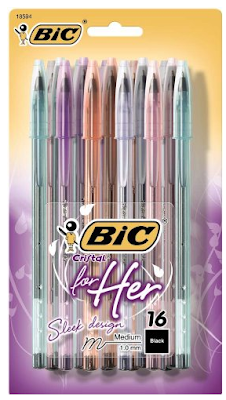 From the reviews at Amazon:

"My drawings of kittens and ponies have improved, and now that I'm writing my last name hyphenated with the Robert Pattinson's last name, I really believe he may some day marry me! I'm positively giddy."

"So you can imagine how hard my heart was pounding when I slipped these into my cart at office depot the other day. I of course told the cashier that they're a present for my wife, but I've been secretly using these at work for over a week. I've covered them in black tape so the guys around the office don't catch on, and I'm careful to never lend them out to ANYONE. It's just my little secret and it feels SO GOOD. I can finally be the REAL ME at the office."

"But the Bic Cristal for Her pens sparkle (like crystal!) and twinkle and dance on the page and even emit little squeaks and giggles when they're writing extra fun stuff. They chatter among themselves and have their own personalities"

"Obviously, I don't use it for vulgar endeavors like math or filling out a voter application, but BIC Cristal for Her is a lovely little writing utensil all the same. Ask your husband for some extra pocket money so you can buy one today!"

"I love the pretty colors and skinniness, but I'm only giving two stars because they're annoying. For one thing, they dot every "i" with a little heart. They also won't make periods at the ends of sentences; it's a question mark or exclamation point every time, also dotted with hearts--SUPER annoying. I went to okay a memo from my boss with the word "Fine" and it looked like I was coming on to him or something, which I wasn't. At ALL."
Labels: amazon, gender
Newer Post Older Post Home