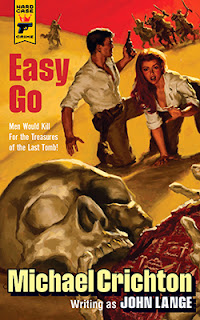 "Long before he wrote Jurassic Park, before he scripted blockbuster movies like Twister, before he created the groundbreaking TV series ER, Michael Crichton was an honors student at Harvard Medical School—and writing paperback suspense novels on the side, under the top-secret pen name 'John Lange.'"


Diver James McGregor is used to exploring sunken ships. But there's something strange about the wreck of the Grave Descend. No one aboard tells quite the same story about what happened. Then there's the mysterious cargo they were carrying...

In one of the most beautiful places on Earth, a sinister plot is about to unfold. And if McGregor's not careful, he may find himself in over his head.


Beneath the sands of the Egyptian desert lies treasure beyond imagining. And when a professor of archaeology finds clues to the location of a Pharaoh's lost tomb in ancient hieroglyphs, he hatches a plan to find the burial site - and plunder it.

But can a five-man team of smugglers and thieves uncover what the centuries have hidden? And even if they find it, can they escape with it...and with their lives?

Easy Go is probably most interesting for this anachronism:


Lord Grover, fifth Earl of Wheatston, was a huge man.  He was nearly six feet tall and weighed over 200 pounds.


Political radical John Wright is plotting an act of mass destruction - and federal agent John Graves has him under surveillance, trying to figure out what the plot is.

When a government computer is hacked and a high-security shipment of nerve gas gets hijacked, Graves puts the pieces together - but can he stop Wright from unleashing his weapon before it kills a million people...including the President of the United States?


To prevent an arms shipment from reaching the Middle East a terrorist group has been carrying out targeted assassinations in Egypt...Portugal...Denmark...France. In response, the United States sends one of its deadliest agents to take the killers down.

But when the agent is delayed in transit, lawyer Roger Carr gets mistaken for him. Now, with some of the world's deadliest men after him, will he survive long enough to prove his identity?