The NY Times has a lengthy excerpt from Marissa Mayer and the Fight to Save Yahoo!. For example, when Yahoo employees grew upset at a performance review system:


As concerns with Q.P.R.s escalated, employees asked if an entire F.Y.I. could be devoted to anonymous questions on the topic. One November afternoon, Mayer took the stage at URL’s as hundreds of Yahoo employees packed the cafeteria. Mayer explained that she had sifted through the various questions on the internal network, but she wanted to begin instead with something else. Mayer composed herself and began reading from a book, “Bobbie Had a Nickel,” about a little boy who gets a nickel and considers all the ways he can spend it.

“Bobbie had a nickel all his very own,” Mayer read. “Should he buy some candy or an ice cream cone?”

Mayer paused to show everyone the illustrations of a little boy in red hair and blue shorts choosing between ice cream and candy. “Should he buy a bubble pipe?” she continued. “Or a boat of wood?” At the end of the book, Bobby decides to spend his nickel on a carousel ride. Mayer would later explain that the book symbolized how much she valued her roving experiences thus far at Yahoo. But few in the room seemed to understand the connection. By the time she closed the book, URL’s had gone completely silent. 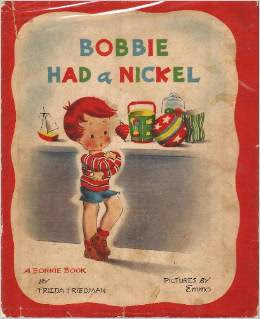