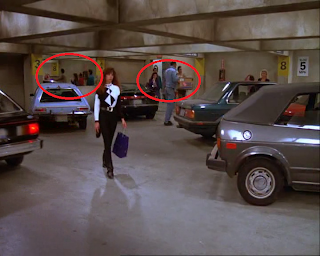 
The Parking Garage was shot, like almost every episode of Seinfeld, on the same soundstage that normally contained Jerry’s apartment. The set was small, but the garage was meant to appear infinite, and so each shot in the episode was a different angle on the same set. The production employed mirrors, lined around the perimeters of the soundstage, to give the illusion of space. In some scenes, the mirrors bend and distort the concrete pillars of the garage, creating pockets of the surreal. Eagle-eyed Internet Seinfeld fanatics have taken the episode apart, finding M.C. Escher-esque continuity errors: cameras reflected in parked cars, and even the cast itself accidentally reflected twice in the same shot. It’s enough to conjure a quantum (or Bizarro) Seinfeld universe to mind, one where the characters are still refracted in mirrors, trapped in this concrete prison for all eternity. Indeed, the more I reflect on The Parking Garage, the more it evokes a specifically Ballardian nightmare: this so-called pornography of infinity, contained within a New Jersey mall.