An Illusionist in Skyrim continues to be hilarious

If you haven't started reading An Illusionist in Skyrim, or haven't kept up, you're in for a treat.  From the most recent entry (the author is playing Skyrim without using any attacks and has to find a way to kill a dragon, Belrand is his NPC bodyguard):

I run up to a mammoth and start jumping around annoyingly. The nearest Giant roars, and waves his club angrily at me – but doesn’t attack. Not good enough. I keep being annoying, dancing dangerously close to the giant himself, but no luck.

Then Belrand catches up, and runs straight at the Giant. Oh hell. I hadn’t accounted for this. I do the only thing I can think to do, and cast Calm on the Giant. The spell does nothing, but feeling it hit sends the Giant into a rage – he turns away from Belrand and charges at me.

Belrand swings his two-handed frost axe at the Giant’s leg, but he keeps coming for me. I’m just about to turn and run when the second Giant catches up to Belrand, raises his club, and brings it slamming down on the ground.

Belrand is crushed – and then, in a quirk of Skyrim’s physics, sent rocketing into the sky. He flies higher than the dragon, until he’s just a glowing speck in the sky, then he vanishes altogether. I am agog. I run.

When I finally risk taking a split second to glance back, the Giant is still storming after me, but the second hasn’t given chase. As far as I can see, Belrand’s body still hasn’t hit the ground. 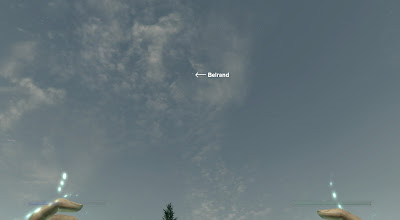