Pilar Castillo "made this hyper-real but very fake U.S. passport" 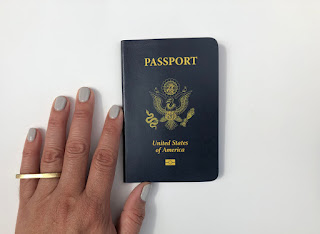 
PASSPORT revisits the political systems imposed by the U.S. government to exploit laborers based on denying them citizenship and human rights. This travel document aims to subvert the visual narrative of the standard issued American passport consisting of scenic and colonial landscapes, wildlife and the wild west. Woven into the ‘official’ document is a partial historical timeline of U.S. intervention into Central America, charting the political, economic and militaristic incursions in the region. This work is created as a response to the humanitarian crisis at the U.S. Mexico border and the Central American ‘immigrant caravan’ being denied refuge and asylum.