The Jazz made a Costacos-inspired poster for Lauri Markkanen 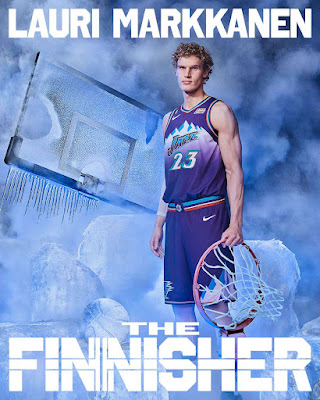 One obvious trend in those classic ‘90s posters was the props and staging used, so the team didn’t want to use Photoshop in order to make the poster come to life. Instead, a special visual effects team was brought in, who acquired six 300-lb blocks of ice and a backboard they could shatter for the poster.
The shoot didn’t go off without a hitch: the team’s first attempt was scuttled by Markkanen’s fever that cost him three games in early December. Eventually, a walk-in freezer at Vivint Arena was found that would keep the blocks of ice fresh for the postponed shoot.
But once Markkanen was healthy, he was impressed with the setup. Photography took about an hour and a half — which also included time for the Finn and his family to take photos for their annual Christmas cards.

Here's a gallery of posters by the Costacos, and there's a collected edition at Amazon.
*Previously: The Costacos make a poster for Dangeruss
Labels: basketball, nba, poster, sports
Newer Post Older Post Home