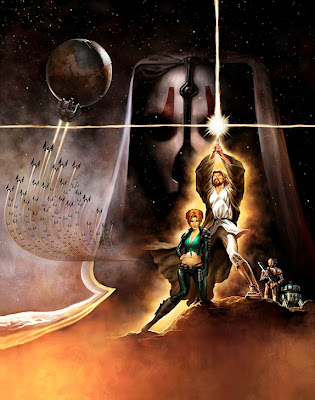 Penny Arcade has a lengthy article about Obsidian concept artist Brian Menze. Here's part of what he had to say about this painting:


This is a cover to Tips &Tricks magazine when it was still published monthly and done in promotion for Star Wars Knights of the Old Republic II: The Sith Lords . . . . Setting this piece up (I thought) would be a breeze. I was wrong. None of the KOTOR2 elements worked as well as they do with the original Star Wars characters . . . .

Whoever it was I corresponding with at the magazine was extremely happy though and even mentioned that he felt it was one of the better covers they’ve ever received. I felt on top of the world. Imagine how disappointed I was after seeing it printed to find they had placed text everywhere on the cover except where the two central characters are. Less than 25% of my work is seen on the cover. It was a little heartbreaking. Internally, I took the image and made it into an actual movie poster complete with a title and credits which was later printed, framed and hung in multiple parts of the building.