Jon Bogdanove's inspiring answer to the question, "What is the easiest way to be invisible? My whole life, I have been noticed and judged."

The full question was:

What is the easiest way to be invisible? My whole life, I have been noticed and judged. However much I try to hide, I still stand out. What should I do to become invisible?

And here's how his answer starts:

Consider the possibility that invisibility may not be the super power you really need. If you have had to endure a lot of judgemental negativity, there is a high probability you have internalized some of it. No matter how invisible you get, you cannot hide from your own thoughts and feelings.
Rather than seeking invisibility, perhaps you should cultivate invulnerability for your super power. Consider Sue Storm (later Sue Richards). as The Invisible Girl, she was often the most overlooked member of The Fantastic Four. At first, she liked being unseen, but she soon found out that didn’t stop her from feeling the judgments of those around her. Her parents were very critical, and even her loving husband Reed, could be very exacting and demanding. Average New Yorkers were often suspicious of her, or outright hateful or fearful. Even though she could turn invisible, supervillains like Dr. Doom always developed ways to detect her. Invisibility alone never protected her.
So, being a true hero at heart, Sue rose to the challenge and worked on her powers. She discovered she could generate invisible force fields. At first they were fairly basic. She could protect herself from a gunman’s bullet—but

A page by Bogdanove from Fantastic Four vs. X-Men: 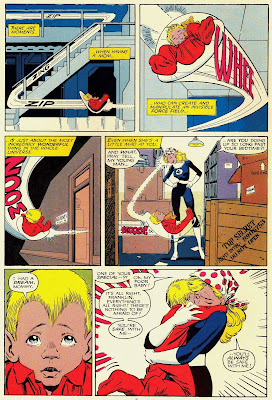