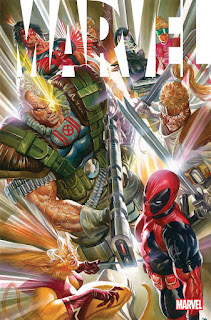 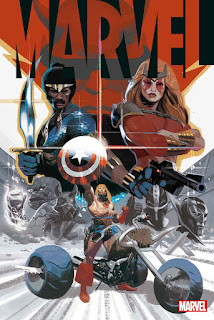 One of the two covers for Marvel #4. The other is by Daniel Acuna.

Back in 1996, during an interview about the series Kingdom Come, this is what Alex Ross said about Cable's design:


Now, wasn't Magog a character created as a response to all those characters that were popping up in the early '90s?

Yeah. That's a character that Mark Waid invented that was really just put to me like come up with the most God awful, Rob Liefeld sort of design that you can. What I was stealing from was - really only two key designs of Rob's - the design of Cable. I hated it. I felt like it looked like they just threw up everything on the character - the scars, the thing going on with his eye, the arm, and what's with all the guns? But the thing is, when I put those elements together with the helmet of Shatterstar -- I think that was his name -- well, the ram horns and the gold, suddenly it held together as one of the designs that I felt happiest with in the entire series.

Yeah. I don't think it ended up looking like a buffoonish character. In a way, that gold rams head affect took it to a new level of almost biblical metaphor that had a nice little touch to it. It's the kind of thing I should have been striving, but it was much more accidental. 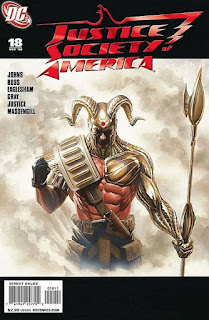 Rob Liefeld gave the new cover a thumbs up: