OK, here's a couple of paragraphs from a long write up at Mel Magazine:

In the Benue State of Nigeria, young men of the Daudu community are running amok because someone is stealing their [privates]. For the last two weeks, these men have grown so distraught about their disappearing members that they’ve burned down at least five homes and attacked and killed a pastor. To curtail the spiraling madness, local government officials just imposed an 8 p.m. curfew.

Turns out, there were no missing members. It also turns out that such claims are endemic to Nigeria.

While looking for a second source, I discovered that the BBC has a pidgin site for Africa: 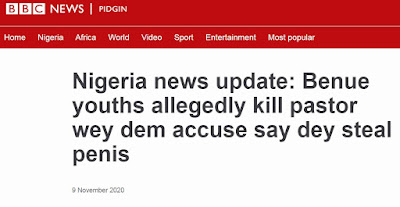