Poster and soundtrack for "The Guest 2" (no movie, but the soundtrack is real) 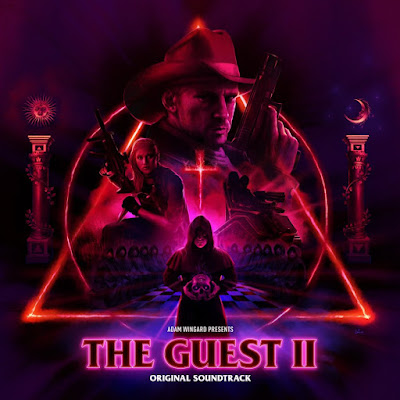 The Guest 2 Original Soundtrack is a soundtrack to an imagined sequel—a film that does not exist. 2014’s The Guest, directed by Adam Wingard, written by Simon Barrett, and starring Dan Stevens as “David,” tells the story of a kind soldier who befriends a grieving family. After a series of mysterious deaths, the teen family members discover the soldier who seems so warm and caring is actually an unstoppable killing machine. For the imagined sequel, Wingard sketched-out story details and enlisted 11 bands to tell the story through the medium of music. Through a wide range of song styles and tones—coupled with very specific song titles and a stunning album cover illustration—we learn what became of David, Anna, Brendan and Major Carver after the events of The Guest.


Available for purchase at the usual music stores (physical version being contemplated), and you can listen below.

The cover art to The Guest II soundtrack - which is real and out today - was based on my actual, written-down sequel concept, so if anyone’s curious, this image more or less clarifies everything we’d have done. pic.twitter.com/qVxxlFUpS3

He is a familiar character, perhaps!