Footage of Indian and Chinese troops fighting to move the border in the Himalayas; Neal Stephenson imagines the near future of that battle involving martial arts influencers

Video of what appears to be a previously unreported violent clash between Indian and Chinese troops at their disputed Himalayan border [in 2021] has emerged online, offering a rare window into the long-simmering territorial tensions between the two Asian powers.
...
Though they’re separated by barbed wire, the footage appears to show Indian troops beating the Chinese soldiers with makeshift weapons, including what look like wooden sticks and metal pipes. In several instances, Indian soldiers can be seen throwing bricks or stones.
Many of the Chinese soldiers, gathered on the other side of the wire, also appear to be holding long sticks or batons.
Eventually the barbed wire collapses and the Indian soldiers move forward, prompting the Chinese troops to jump over a short stone wall and leave the area, to cheers from the Indian side.

Here's a detailed analysis with maps concluding that China has built new infrastructure in the area to allow quick movement of troops and supplies.
One storyline in Neal Stephenson's Termination Shock (I'm about halfway through the novel) imagines civilians joining the fight as sponsored athletes: 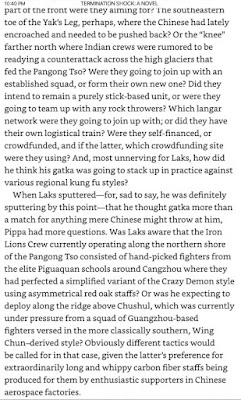