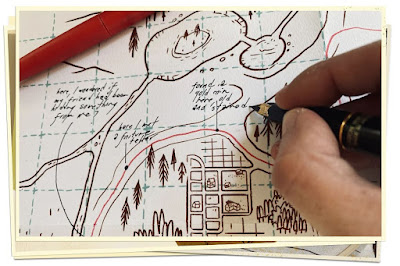 You will play the game by planning your route, marking the map, and building a story by answering prompt cards. The prompt cards will ask you to consider your relationship with your friend, mark your map with beads or written notes, introduce you to delightful characters(including at least one dog), and will sometimes affect the path you have chosen. The gameplay time can vary between one hour(solo, paper and pen only) to two hours or more(collaborative gameplay, with hand-sewing). The game is designed to be played solo, but the game booklet will also include suggestions on how to play this as a 2 person game(using a single game kit), or communally in a larger group.

A review of this game and other games that leave the player with a keepsake:

Though the game can be completed in a few hours, I crafted my journey over several weeks, embracing the intimate connection I’d forged with my characters by keeping a slow pace.
At one point, I found myself tearing up when I decided to part ways with a dog that had accompanied most of my journey. (I left it with a family before climbing a perilous mountain – I’m not a monster!) To represent the dog, I’d been embroidering a second path alongside my own, and ceasing that path was unexpectedly devastating.