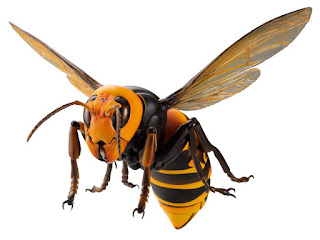 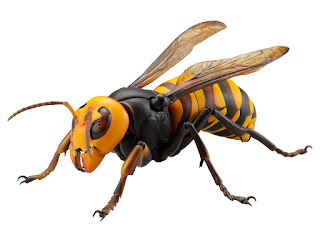 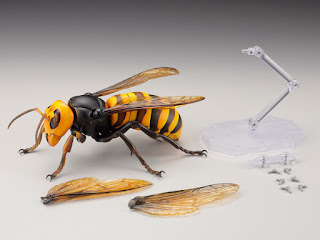 Part of the Revoltech line:


Great Hornet (Scientific Name: Vespa mandarinia) Wasps are home mainly in East Asia, and the Giant Hornet is among the largest of all. Attributed by its large size, high toxicity, and tendency to swarm, it is one of the most dangerous insects in the world. The wasp's venomous stinger, strong body, and crushing jaws make it a deadly hunter, capable of single-handedly taking down mantises.

Every part is articulated, from the antennae to the stinger. Articulated mandibles and mouth parts have been faithfully recreated. The large compound eyes are made of transparent material to enhance the vibrant coloration. The abdomen is also posable, and the body can be bent forward into an aggressive pose. The wasp's greatest weapon, its venomous stinger, can be retracted without replacing any parts. Wings are folded in its default pose, but can be replaced to recreate in-flight poses. Legs come equipped with joints for recreating various poses. Leg joints can be replaced with a fixed joint for better displayability. Includes a Display base, allowing you to choose between two types of GEO arms to securely display in both default and in-flight poses.

My conspiracy theory is that time travel IS real & someone keeps trying to fix 2020 by changing something but every time they do, they unwittingly make it worse. How else do you explain the sudden disappearance of murder hornets? They saved us from those but at what cost?!?!
— Chantal KC (@NSLCpunk) June 24, 2020