One of the books in the latest Humble Bundle is a Mass Effect novel called "Initiation," co-written by N.K. Jemisin, who is famous for The Hundred Thousand Kingdoms and The Fifth Season. Fairly late in the novel, the main character becomes extremely emotionally and physically charged up and encounters a fearsome enemy in a narrow hallway.  I'm only vaguely aware of the Mass Effect rules--I guess characters can specialize in using magic-like forcefields, or more traditional projectile weapons and physical combat.  Anyway, this moment cleverly gives the reader agency, as if they're playing a game instead of reading: 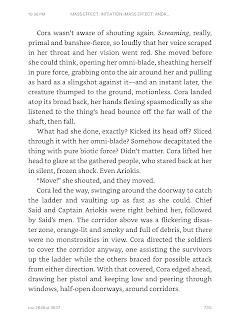