Royal Mint's new tribute coin to H.G. Wells includes a quote he didn't say, and depicts his famous tripods as having four legs

Intended to mark 75 years since the death of the author, the coin has already been criticised for depicting the “monstrous tripod” featured in The War of the Worlds with a fourth leg, and for giving his Invisible Man a top hat, which the character never wore. Then the Wells expert Prof Simon James spotted the quote chosen for the edge of the coin: “Good books are warehouses of ideas.” James and his fellow academic Adam Roberts, a vice-president of the Wells Society, could source no such quote in Wells’s writing

The error echoes a previous literary mistake by the Royal Mint: the £10 Jane Austen bank note was printed with the quote, “I declare after all there is no enjoyment like reading!” – a line spoken not by Austen but by her character Caroline Bingley, who has no interest in books at all. 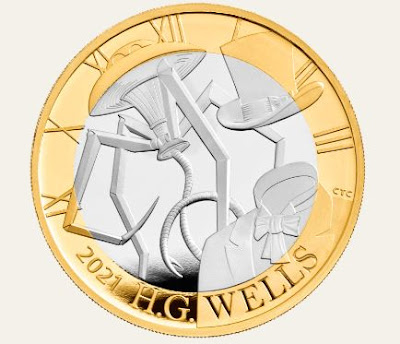