Jon Klassen's new illustrated book is called The Rock from the Sky. You can save a few bucks and preorder the hardcover or kindle version from Amazon. But while supplies last, you can order it from the Book People and get a signed print: 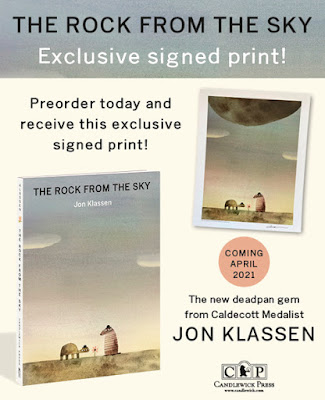 Jon posted one of the stories from the book:

Today we are starting the pre-order campaign for “The Rock From The Sky”. The book has five connected stories in it & today I’m gonna post the whole FIRST story in a thread. Here it is. The first story is called “The Rock” pic.twitter.com/2FrVQHuHF5

And finally, the stress rock:

a stress rock is not only an apt publisher promo for the current general mood but also if you read the book & don’t like it you can take it out on the rock pic.twitter.com/z0Mp4PNu7q