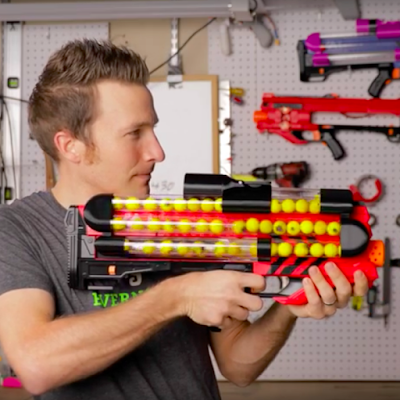 Ever wanted "a bolt-on blaster for your blaster, so you can shoot while you reload"? Here's the article for you:

Even by itself, the $99 Jupiter is an impressive sidearm, able to unleash a 12-ball blitz so fast foes don’t know what hit them. (That’s also partly because it’s so small.) I took it to a Nerf war before the pandemic hit, and I could tag out entire groups of foes at close range so long as I was willing to sacrifice myself — or lucky enough to find some cover for a rapid reload. But with the Proton Pack, it can live up to its Ghostbusters namesake: a nonstop stream of balls, only limited by the size of the ammo drum you’re willing to haul around.

I cram the entry-level 430-round hopper into my backpack, fill it to the brim with foam spheres, and seal it tight so the pressure from its brushless blower fan (and jam-busting auger) can feed them into the tube. And then, yes, I cackle too — as every single one of those 430 balls blast across my backyard from a veritable firehose I can hold in a single hand. Which in turn invites an obvious question: why not wield two?

There are risks to building your entire livelihood on a hobby predominantly controlled by a single company, of course. Nerf brand owner Hasbro discourages modding as a general rule, and when its entire 2020 lineup of “Elite 2.0” blasters turned out to be a cut-rate selection of poor performers that were hard for modders to open, he wound up with nothing to sell.