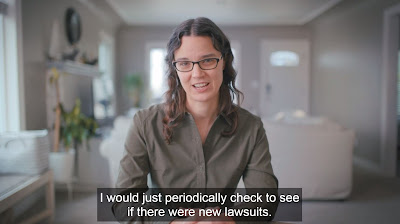 Here's one good interview with Meg Conley about the series:

My childhood takeaway was that MLMs were scams. But they were scams where you had to be polite to the scammer because they didn’t know they were being scammed.
...
When Mark talks about meeting Deanne for the first time, he said “before I said a word to her, there was something powerful.” He never describes her as a businesswoman. Every decision that moves her forward in her business is suggested or made by someone else: the man at the swap meet asking her to sell dresses for him, her daughter asking her to make a maxi skirt after which she says, “I found myself cutting out patterns on my kitchen counter.” (I “found myself!” That passive voice!)
...
the focus of the story is on these suburban moms and these leggings but there is no discussion about who is really, really at the bottom of this pyramid scheme. The people working the line to manufacture the leggings.
...
It’s especially bewildering that the documentary doesn’t get into manufacturing at all because the LuLaRoe scheme isn’t initially undone by its pyramid shape! LuLaRoe starts falling apart because the leggings start falling apart. Why?

These are women who are often excellent at a whole slew of tasks — who run PTAs, manage family finances, keep kids and spouses on track, and maintain familial and social ties for the whole family — but whose work is uncompensated and largely invisible. And, importantly, whose work was often solitary.
LuLaRoe, and other MLMs, gave these women space for ambition — just a little, not too much, and in the solidly gender-segregated realm of selling women’s clothing to other women. And the goal was clear: Not financial independence for women, but the enhanced ability for a mother to contribute to her family without compromising her primary obligation to care for her household.
Just as importantly, LuLaRoe gave these women an excuse for adult connection — a reason to throw parties, to go on cruises, to meet other women and extend their social networks in ways that didn’t revolve around their kids. They could talk business, not family.

I watched the series thinking about guys with laser eyes and crypto in their handles.

NFT marketplace OpenSea acknowledges that its head of product, Nate Chastain, purchased NFTs he knew were going to be displayed prominently (@ryanjamesweeks / The Block)https://t.co/x7CEne2taPhttps://t.co/AfarM8MbiV

This morning @CNBC was duped into helping orchestrate a pump-and-dump in #Litecoin, which also lifted #Bitcoin, by promoting a false headline that Walmart had partnered with Litecoin to accept #crypto currency payments. CNBC's crypto bias helped the fraudsters pull off this scam.